Zanon Wines is the creation and vision of Columbus, Ohio resident Scott Zanon, who spent 16 years in the wine industry. After graduating from The Ohio State University in 1983 with a BS in Agriculture (Agronomy and Horticulture), Scott began by working in the retail side of the business for two years. The first year was spent at Globetrotter Wine & Cheese and the second with Beer and Wine Beverage Center where he was the manager. Both were located in Columbus.

In 1985, Scott was offered a sales position in the wholesale side of the business with American Beverage, a division of Litter Beverage Company. After a very successful year stint, he was approached and hired by Bauer & Foss, Inc. and spent the next 14+ years there. The first year he was involved with starting the ProVin subsidiary wine company and in the second year, progressed to the supermarket side as Bauer & Foss was just getting involved in that aspect of the business.

For the next 10+ years, he was the buyer for all wines coming from the West Coast including California, Oregon, and Washington plus still called on eighteen high profile retail and restaurant establishments. It was also during this time that Scott established the “Microbrewery” division for the company and secured for the State of Ohio such iconic brands like Sierra Nevada, Brooklyn, Saranac, Dock Street, Portland, Olde Heurich, Celis, Chicago, and New Amsterdam.

During this time period, he was able to travel a bit to California and established relationships with many wineries and growers that he still maintains today. The Zinfandel grape and the wine it produces has always been a favorite. The style back then was a food wine that was medium-bodied and balanced compared to the many hedonistic high alcohol, fruit bombs that are produced today.

Scott left Bauer & Foss in early 2000 and started his own successful business – LifeServers, Inc., an authorized national distributor for both Cardiac Science and Physio-Control AEDs (Automated External Defibrillators). He sold the business at the end of 2017. In 2009, he also wrote a book on trees and its revised version Landscaping with Trees in the Midwest – A Guide for Residential & Commercial Properties was released by publisher Ohio University Press in July of 2014 and was awarded the 2015 GWA Winner of the Silver Award of Achievement from the Garden Writers Association.

Still when Scott visited wine country (Sonoma and Napa) there was a tug. The passion has never left him entirely and he decided to ask friends who own a Sonoma County winery that was started in 1927 if they ever had any extra grapes and/or wine, specifically Zinfandel. With a last name of Zanon, was there really a choice?

2011 was the first vintage with 400 cases produced and all for the State of Ohio. The wine was introduced in February of 2014. You will notice the Dry Creek appellation prominently displayed on the front label. In his eyes, Dry Creek Valley is the best spot in the world to grow Zinfandel…period. The 2013 bottling debuted the words “Old Vine” on the front label as the vineyard source is 40+ years old.

The wines are delicious and affordable. We hope you search the wines out and enjoy their elegant style! Enjoy these very special Dry Creek and Russian River Valley wines with friends, family, and food but please do so responsibly.

Scott was featured in the April, 2019 edition of Columbus CEO magazine. Read the article on the Columbus CEO web site, or you can download a PDF of the full page from the magazine here. 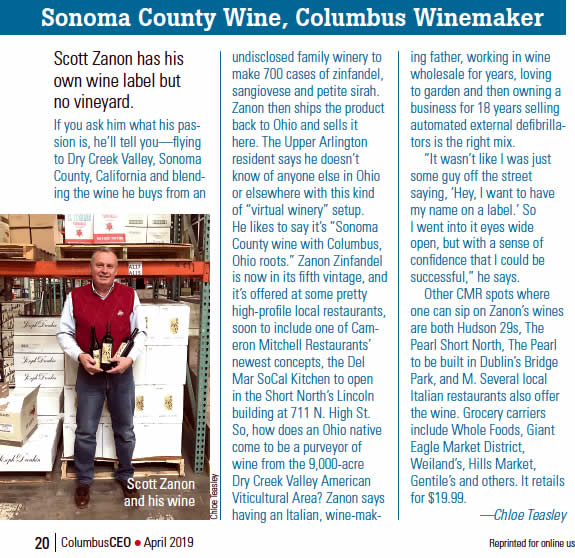